Previously, we allocated a chunk of memory and put data in it. The next line will free this chunk. Before we run the instruction and show the demo result, let’s discuss the theory first.

The allocator could store all the freed chunks together in a long linked list, this would work but the performance would be slow. Instead, the glibc maintains a series of freed linked lists called bins, which can speed up the allocations and frees. We will examine how bins work later.

It is worth noting that each free chunk needs to store pointers to other chunks to form the linked list. That’s what we discussed in the last section, there’re two points in the malloc_chunk structure: fd and bk, right? Since the user data region of the freed chunk is free for use by the allocator, so it repurposes the user data region as the place to store the pointer.

Based on the above description, the following picture illustrates the exact structure of a freed chunk:

Now step over one line in gdb and check chunks in the heap as follows: 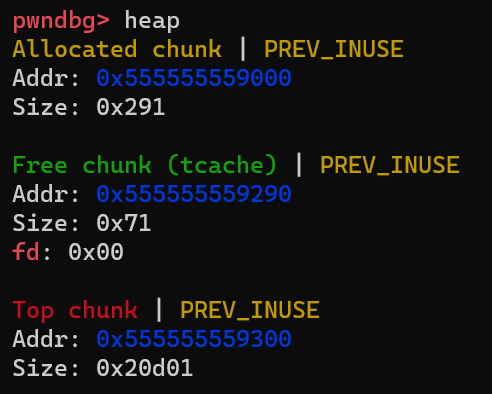 You can see the changes: the allocated chunk is marked as a Free chunk (tcache) and pointer fd is set(which indicates this freed chunk is inserted into a linked list).

The tcache is one kind of bins provided by glibc. The gdb pwndbg plugin allows you to check the content of bins by running command bins as follows: 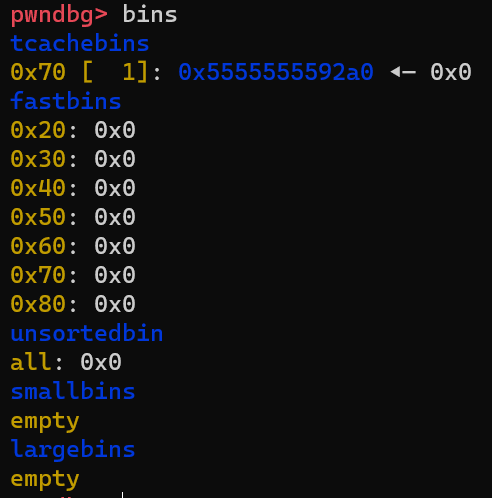 Note that there 5 types of bins: small bins, large bins, unsorted bins, fast bins and tcache bins. If you don’t know, don’t worry I will examine them in the following section.

According to the definition, after the second malloc(100) is called, the allocator should reuse the freed chunk in the bins. The following image can prove this:

The freed chunk at 0x555555559290 is in use again and all bins are empty after the chunk is removed from the linked list. All right!

Next, I want to spend a little bit of time examining why we need bins and how bins optimize chunk allocation and free.

If the allocator keeps track of all the freed chunks in a long linked list. The time complexity is O(N) for the allocator to find a freed chunk with fit size by traversing from the head to the tail. If the allocator wants to keep the chunks in order, then at least O(NlogN) time is needed to sort the list by size. This slow process would have a bad impact on the overall performance of programs. That’s the reason why we need bins to optimize this process. In summary, the optimization is done on the following two aspects:

Take the small bins and large bins as a reference, they are defined as follows:

They are defined together in an array of linked lists and each linked list(or bin) stores chunks that are all the same fixed size. From bins[2] to bins[63] are the small bins, which track freed chunks less than 1024 bytes while the large bins are for bigger chunks. small bins and large bins can be represented as a double-linked list shown below: 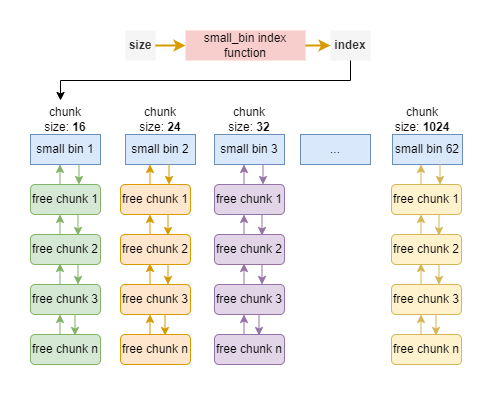 The glibc provides a function to calculate the index of the corresponding small(or large) bin in the array based on the requested size. Since the index operation of the array is in O(1) time. Moreover, each bin contains chunks of the same size, so it can also take O(1) time to insert or remove one chunk into or from the list. As a result, the entire allocation time is optimized to O(1).

bins are LIFO(Last In First Out) data structure. The insert and remove operations can be illustrated as follows: 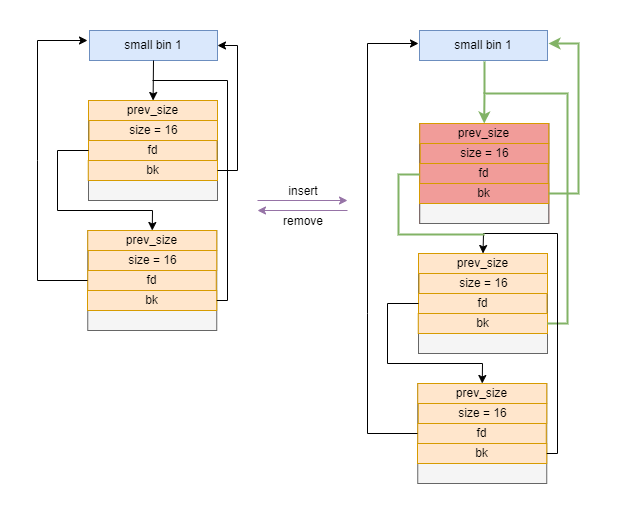 Moreover, for small bins and large bins, if the neighbors of the current chunk are free, they are merged into a larger one. That’s the reason we need a double-linked list to allow running fast traverse both forward and backward.

Unlike small bins and large bins, fast bins and tcache bins chunks are never merged with their neighbors. In practice, the glibc allocator doesn’t set the P special flag at the start of the next chunk. This can avoid the overhead of merging chunks so that the freed chunk can be immediately reused if the same size chunk is requested. Moreover, since fast bins and tcache bins are never merged, they are implemented as a single-linked list.

This can be proved by running the second free method in the demo code and checking the chunks in the heap as follows:

First, the top chunk’s size is still 0x20d01 rather than 0x20d00, which indicates the P bit is equal to 1. Second, the Free chunk only has one pointer: fd. If it’s in a double-linked list, both fd and bk should point to a valid address.

The letter t in tcache bins represents the thread, which is used to optimize the performance of multi-thread programs. In multi-thread programming, the most common way solution to prevent the race condition issue is using the lock or mutex. Similarly, The glibc maintains a lock in the data structure for each heap. But this design comes with a performance cost: lock contention, which happens when one thread attempts to acquire a lock held by another thread. This means the thread can’t do any tasks.

tcache bins are per-thread bins. This means if the thread has a chunk on its tcache bins, it can serve the allocation without waiting for the heap lock!

In this article, we examined how the userland heap allocaor works by debugging into the heap memory with gdb. The discussion is fully based on the glibc implementation. The design and behavior of the glibc heap allocator are complex but interesting, what we covered here just touches the tip of the iceberg. You can explore more by yourself.

Moreover, I plan to write a simple version of a heap allocator for learning and teaching purpose. Please keep watching my blog!