The previous article gave a general overview of memory management. The story goes on. In this section, let’s break into the heap memory to see how it works basically.

We need to first understand some terminology in the memory management field:

The relationship between the mutator and allocator is shown in the following diagram: 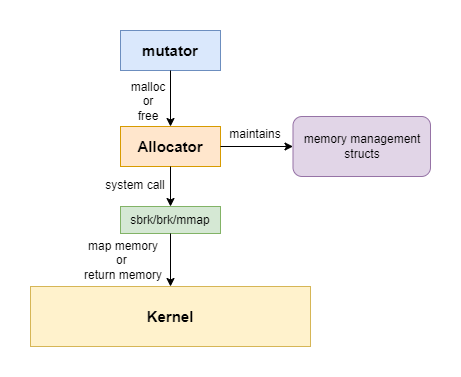 There is a third component in the memory management field: the garbage collector(GC). GC reclaims memories automatically. Since this article is talking about manual heap memory allocation in system programming, we will ignore GC for now. GC is a very interesting technical challenge, I will examine it in the future. Please keep watching my blog!

We will use gdb and pwndbg(which is a gdb plugin) and break into the heap memory to see how it works. The gdb provides the functionality to extend it via Python plugins. pwndbg is the most widely used.

The demo code is as follows:

The demo code above just allocates some memory, set the content of the memory and releases it later. And then allocate other chunks of memory again. Very simple, all right?

First, set a breakpoint at line 7(the first malloc call) and run the program in gdb. Then run vmmap command from pwndbg, which can get the process memory layout as follows:

Note that there is no heap segment yet before the first malloc call is made. After step over one line in gdb, check the layout again:

Now the heap segment is created with the size of 132KB(21000 in hexadecimal). As described above, the kernel maps 132KB of physical memory to this process’s virtual memory and marks this 132KB block of physical memory as used to isolate other processes. This mapping routine is done via system calls like brk, sbrk and mmap. Please investigate these system calls yourself.

132KB is much bigger than the 100B(the size passed to malloc). This behavior can answer one question at the beginning of this article. The system calls aren’t necessary to be triggered each time when malloc is called. This design is aimed to decrease performance overhead. Now the 132KB heap memory is maintained by the allocator. Next time the application calls malloc again, the allocator will allocate memory for it.

Next, step one more line in gdb to assign value(“AAAABBBBCCCCDDDD”) to the allocated block. Let’s check the content of this 132KB heap segment with heap command as follows: 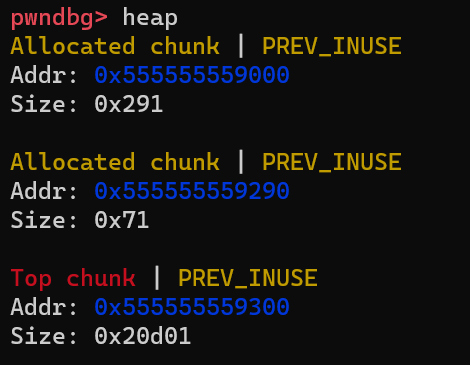 There are 3 chunks. Let’s examine these chunks one by one.

Then let’s look at the chunk with the size of 0x291. The allocator uses this chunk to store heap management structures. It is not important for our analysis, just skip it.

What we care about is the chunk in the middle with a size of 0x71. It should be the block we requested and contains the string “AAAABBBBCCCCDDDD”. We can verify this point by checking its content:

We can see that the string “AAAABBBBCCCCDDDD” is there. So our guess is correct. But the question is why the size of this chunk is 0x71. To understand this, we need to first analyze how the allocator stores chunk. A chunk of memory is represented by the following structure:

Based on the above description, the following picture illustrates the exact structure of an allocated chunk:

The memory in between is reserved for the metadata mentioned above: prev_size and size. On a 64-bit system, they’re (type of INTERNAL_SIZE_T) 8 bytes in length.

For the size field, it is worth noting:

According to this, let’s review the content of this chunk again:

In this section, we break into the heap segment and see how an allocated chunk works. Next, we’ll check how to free a chunk.