In this series of articles, I want to talk about circuit breaker pattern based on an popular open source project hystrix (in fact, I will take a look at the golang version hystrix-go, instead of the original version which is written in Java).

As the first article of this series, I will give a general introduction to circuit breaker, let you know what it is and why it is important. Moreover, let’s review the background about the project hystrix-go and hystrix, and understand the basic usage with a small demo example.

Software in distributed architectures generally have many dependencies, and the failure at some point for each dependency(even the most reliable service) is inevitable.

What happens if our failing service becomes unresponsive? All services that rely on it have risks to become unresponsive, too. This is called catastrophic cascading failure.

The design philosophy behind the circuit breaker pattern is fail fast: when a service becomes unresponsive, other services relying on it should stop waiting for it and start dealing with the fact that the failing service may be unavailable. By preventing a single service’s failure cascading through the entire system, the circuit breaker pattern contributes to the stability and resilience of the whole system.

The circuit breaker pattern can be implemented as a finite-state machine shown below: 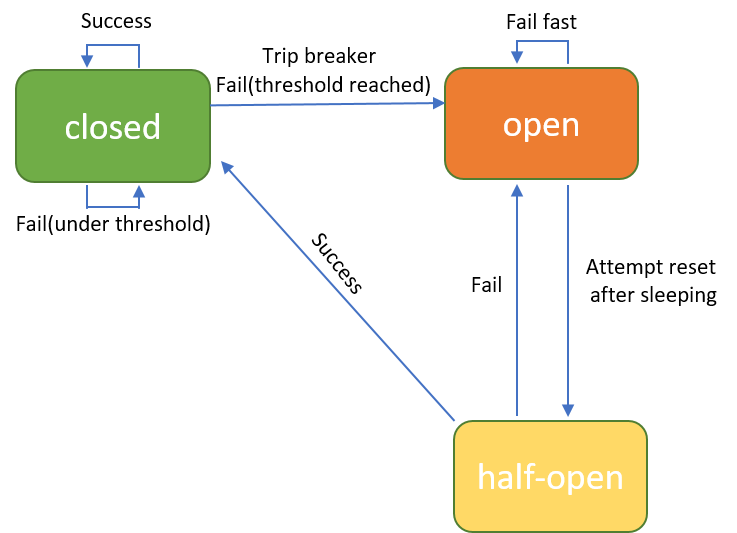 There are three statuses: open, closed and half-open

That’s basic background about circuit breaker, you can find much more information about it on line.

Next, let’s investigate the project hystrix.

hystrix is a very popular open source project. You can find everything about it in this link.

I want to quote several important points from the above link. Hystrix is designed to do the following:

You can see hystrix perfectly implements the idea of circuit breaker pattern we talked about in the last section, right?

The hystrix project is developed with Java. In this sereis of articles I prefer to use a golang version hystrix-go, which is a simplified version but implements all the main designs and ideas about circuit breaker.

For the usage of hystrix-go, you can find it in this link, which is very straightforward to understand. And you can easily find many other articles online with demo examples to show more usage level stuff. Please go head to read.

In my articles, I want to go into the source code of hystrix-go and have an advanced investigation about how circuit breaker is implemented. Please follow up to read the next articles in this series.

In this article, I talked about the background of circuit breaker pattern and the basic information of the popular open-source project in this field hystrix-go. Next step, we will take an in-depth look at the source code of this project.