In the previous article, we examined how to develop a network sniffer with PF_SOCKET socket in Linux platform. The sniffer developed in the last article captures all the network packets. But a powerful network sniffer like tcpdump should provide the packet filtering functionality. For instance, the sniffer can only capture the TCP segment(and skip the UPD), or it can only capture the packets from a specific source IP address. In this article, let’s continue to explore how to do that.

Berkeley Packet Filter(BPF) is the essential underlying technology for packet capture in Unix-like operating systems.
Search BPF as the keyword online, and the result is very confusing. It turns out that BPF keeps evolving, and there are several associated concepts such as BPF cBPF eBPF and LSF. So let us examine those concepts along the timeline:

Where to place BPF

The first question to answer is where should we place the filter. The last article examines the path of a received packet as follows: 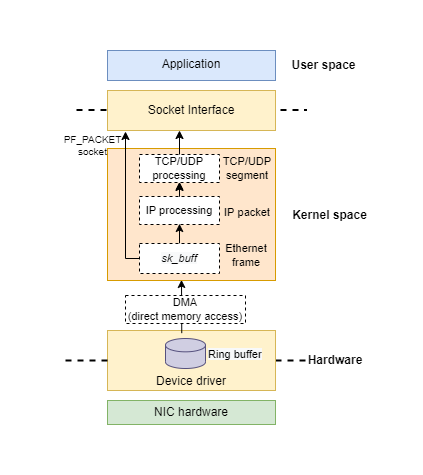 The best solution to this question is to put the filter as early as possible in the path. Since copying a large amount of data from kernel space to the user space produces a huge overhead, which can influence the system performance a lot. So BPF is a kernel feature. The filter should be triggered immediately when a packet is received at the network interface.As the original BPF paper said To minimize memory traffic, the major bottleneck in most modern system, the packet should be filtered ‘in place’ (e.g., where the network interface DMA engine put it) rather than copied to some other kernel buffer before filtering.
Let’s verify this behavior by examining the kernel source code as follows (Note the kernel code shown in this article is based on version 2.6, which contains the cBPF implementation.):

packet_rcv function calls run_filter, which is just the BPF logic part(Currently, you can regard it as a black box. In the next section, we’ll examine the details). Based on the return value of run_filter the packet can be filtered out or put into the queue.

As I mentioned above, BPF was introduced in this original paper written by researchers from Berkeley. I strongly recommend you read this great paper based on my own experience. In the beginning, I felt crazy to read it, so I read other related documents and tried to understand BPF. But most documents only cover one portion of the entire system, so it is difficult to piece all the information together. Finally, I read the original paper and connected all parts together. As the saying goes, sometimes taking time is actually a shortcut.

A packet filter is simply a boolean-valued function on a packet. If the value of the function is true the kernel copies the packet for the application; if it is false the packet is ignored.

You can regard the BPF as a virtual CPU. And it consists of an accumulator, an index register(x), a scratch memory store, and an implicit program counter. If you’re not familiar with these concepts, I add some simple illustrations as follows:

In the BPF machine, the accumulator is used for arithmetic operations, while the index register provides offsets into the packet or the scratch memory areas.

Same as the physical CPU, the BPF provides a small set of arithmetic, logical and jump instructions as follows, these instructions run on the BPF virtual machine(or CPU): 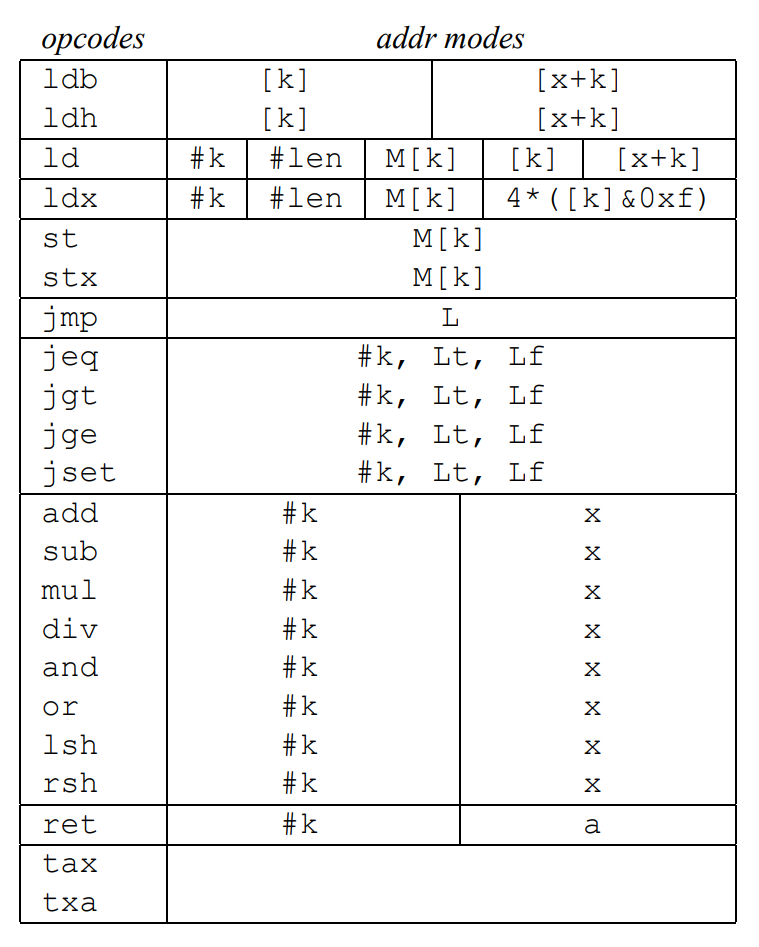 This kind of assembly-like style is more readable to humans. But when we develop an application (like the sniffer written in this article), we use binary code directly as the BPF instruction. This kind of binary format is called BPF Bytecode. I’ll examine the way to convert this assembly language to bytecode later. 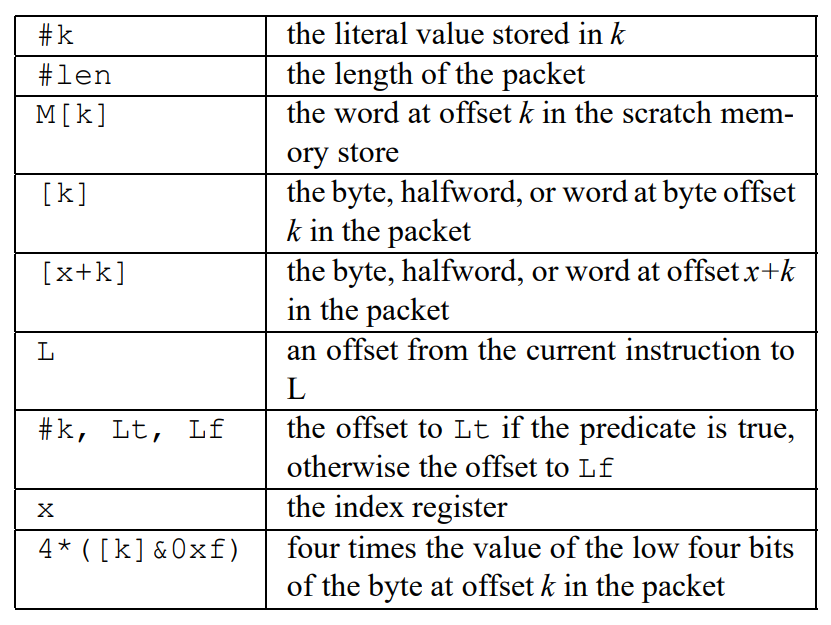 For instance, [k] means the data at byte offset k in the packet. #k means the literal value stored in k. You can read the paper in detail to check the meaning of other address modes.

Now let’s try to understand the following small BPF program based on the knowledge above:

The first instruction ldh loads a half-word(16-bit) value into the accumulator from offset 12 in the Ethernet packet. According to the Ethernet frame format shown below, the value is just the Ethernet type field. The Ethernet type is used to indicate which protocol is encapsulated in the frame’s payload (for example, 0x0806 for ARP, 0x0800 for IPv4, and 0x86DD for IPv6).

The second instruction jeq compares the accumulator (currently stores Ethernet type field) to 0x800(stands for IPv4). If the comparison fails, zero is returned, and the packet is rejected. If it is successful, a non-zero value is returned, and the packet is accepted. So the small BPF program filters and accepts all IP packets. You can find other BPF programs in the original paper. Go to read it, and you can feel the flexibility of BPF as well as the beauty of the design.

Next, let’s examine how kernel implements BPF. As mentioned above, the hook function packet_rcv calls run_filter to handle the filtering logic. run_filter is defined as follows:

You can find that the real filtering logic is inside sk_run_filter:

Same as we mentioned, sk_run_filter is simply a boolean-valued function on a packet. It maintains the accumulator, the index register, etc. as local variables. And process the array of BPF filter instructions in a for loop. Each instruction will update the value of local variables. In this way, it simulates a virtual CPU. Interesting, right?

Since each network packet must go through the filtering function, it becomes the performance bottleneck of the entire system.

A just-in-time (JIT) compiler was introduced into the kernel in 2011 to speed up BPF bytecode execution.

In the BPF case, the JIT compiler translates BPF bytecode into a host system’s assembly code directly, which can optimize the performance a lot. I’ll not show details about JIT in this article. You can refer to the kernel code.

Next, let’s add BPF into our packet sniffer. As we mentioned above in the application level, the BPF instructions should use bytecode format with the following data structure:

Second, we can use tcpdump, which provides the converting functionality. You can find the following information from the tcpdump man page:

tcpdump ip means we want to capture all the IP packets. With options -d, -dd and -ddd, the output goes as follows:

Option -d prints the BPF instructions in assembly language (same as the example BPF program shown above). Options -dd prints the bytecode as a C program fragment. So tcpdump is the most convenient tool when you want to get the BPF bytecode.

The BPF filter bytecode (wrapped in the structure sock_fprog) can be passed to the kernel through setsockopt system call as follows:

So far, every piece is connected. The puzzle of BPF is solved. The BPF machine allows the user-space applications to inject customized BPF programs straight into a kernel. Once loaded and verified, BPF programs execute in kernel context. These BPF programs operate inside kernel memory space with access to all the internal kernel states available to it. For example, the cBPF machine which uses the network packet data. But this power can be extended as eBPF, which can be used in many other varied applications. As someone said In some way, eBPF does to the kernel what Javascript does to the websites: it allows all sorts of new application to be created. In the future, I plan to examine eBPF in depth.

We examined the BPF filtering theory on the kernel level a lot in the above section. But for our tiny sniffer, the last step we need to do is process the network packet.

You can find the complete source code of the sniffer in this Github repo.

In this article, we examine how to add filters to our sniffer. First, we analyze why the filter should be running inside kernel space instead of the application space. Then, this article examines the BPF machine design and implementation in detail based on the paper. We reviewed the kernel source code to understand how to implement the BPF virtual machine. As I mentioned above, the original BPF(cBPF) was extended to eBPF now. But the understanding of the BPF virtual machine is very helpful to eBPF as well.