HTTP is everywhere. As a software engineer, you’re using the HTTP protocol every day. Starting an HTTP server will be an easy task if you’re using any modern language or framework. For example, in Golang you can do that with the following lines of code:

Note: This article is inspired by Joe Schafer’s post a lot. My implementation has something different which totally removes dependency on Golang’s net package, but the idea of using system call in Golang to setup the TCP/IP connetion is the same. Thanks very much for Joe Schafer’s interesting post.

Another thing I need to mention is this article will cover many concepts, but it’s very difficult to discuss all of them in detail. To understand this article smoothly, you need some prerequisite knowledge such as OSI model, TCP/IP stack, socket programming, HTTP protocol and system call. I will add some explanations on these topics to help you understand this article and give some references and links to let you continue exploring more in advanced level.

OSI model partitions the data flow in a communication system into seven abstraction layers. These layers form a protocol stack, with each layer communicating with the layer above and the layer below as follows: 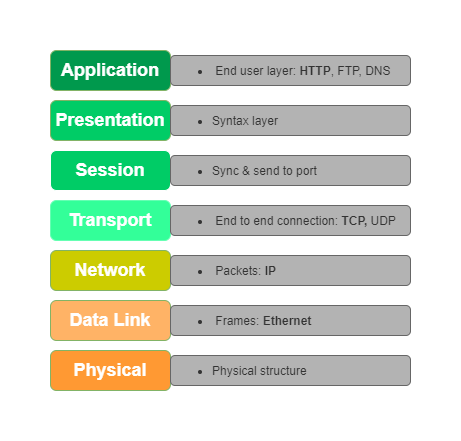 OSI is a general model, which was first specified in the early 1980s. But neither traditional nor modern networking protocols fit into this model neatly. For example, TCP/IP stack does not define the three upper layers: session, presentation, and application. In fact, it does not define anything above the transport layer. From the viewpoint of TCP/IP, everything above the transport layer is part of
the application. So the layered network model more consistent with Linux (TCP/IP stack is implemented in Linux kernel) is as follows:

Once again, it is important to point out that the upper layers—Layers 5, 6, and 7—are not part of the TCP/IP stack.

Another critical point to understand is data encapsulation. The data flow goes from the bottom physical level to the highest-level representation of data in an application.

Each layer has administrative information that it has to keep about its own layer. It does this by adding header information to the packet it receives from the layer above, as the packet passes down. Each header contains information regarding the message contents. For example, one HTTP server sends data from one host to another. It uses the TCP protocol on top of the IP protocol, which may be sent over Ethernet. This looks like: 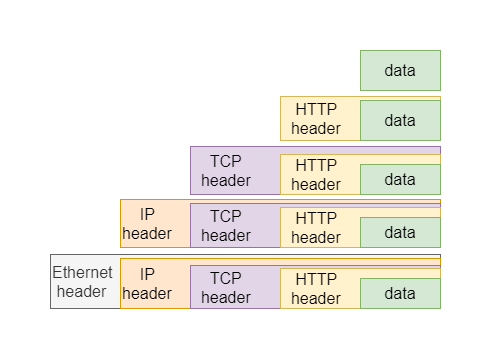 The packet transmitted over ethernet, is the bottom one. On the receiving side, these headers are removed as the packet moves up.

Next let’s see how TCP/IP stack encapsulates HTTP message and send it over the network through socket. The idea can be illustrated with the following image: 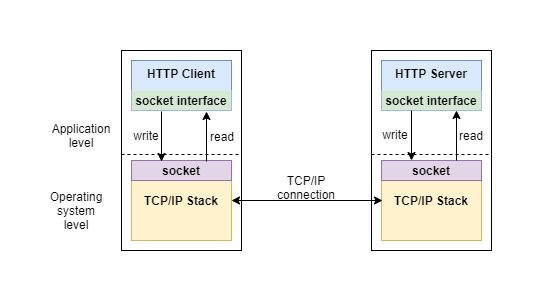 I will explain how it works by writing a HTTP server from scratch, you can refer to this Github repo to get all the code.

TCP/IP stack is originated from ARPANET project, which is integrated into Unix BSD OS as the first implementation of TCP/IP protocols.

Nowadays, TCP/IP is still implemented in the operating system level. For Linux system, you can find the source code inside the kernel. The detailed implementation is outside the scope of this article. You can study it in this Github link.

As I mentioned in the above sections, HTTP server is running in the application level. How it can work with TCP/IP stack which lives in the kernel? The answer is socket.

The socket interface was originally developed as part of the BSD operating system. Sockets provide an interface between the application level programs and the TCP/IP stack. Linux (or other OS) provides an API and sockets, and applications use this API to access the networking facilities in the kernel.

One main advantage of sockets in Unix or Linux system is that the socket is treated as a file descriptor, and all the standard I/O functions work on sockets in the same way they work on a local file. File descriptor is simply an integer associated with an open file.

You may heard everything in Unix is a file. The file can be a network connection, a pipe, a real file in the disk, a device or anything else. So when you want to send data to another program over the Interent you will do it through a file descriptor.

In our HTTP server case, it will get the request by reading data from the socket and send the response by writing data to the socket.

Next, let’s review the source code to see how the HTTP server is implemented.

First, we need setup the TCP connection through socket, the process can be described in the following image:

In Golang, net package provides all the socket related functionalities. Since this article’s purpose is writing a HTTP server from scratch, so I create a package named simplenet to provide the very basic implementation.

netSocket data model is created to represent the socket, which contains only one field fd means file descriptor. And all the socket related APIs: Read, Write, Accept and Close, are defined. The usage of socket API is not in this article’s scope, you can easily find a lot of great documents about it online.

The logic of netSocket is not complicated, because it delegates the job to the kernel by system call. A system call is a programmatic way a program requests a service from the kernel, in detail you can refer to this article. In Golang, all the system calls are wrapped inside the syscall standard package.

One thing need to mention is different platform have different syscall usages, so the demo code shown in this article can only be compiled and build on Linux system.

Now we setup the TCP server and wait for connection request from client side. Next, let’s see how to read or write HTTP request and response through socket.

The main workflow is as follows:

As you can see, the HTTP request parsing logic is defined in the ParseRequest method in simplenet package.

The HTTP request message can be divided into three parts request line, request headers and request body as follows:

The logic inside ParseRequest handles these 3 parts step by step. You can refer to the comments in the demo code.

One thing need to emphasis is that ParseRequest method doesn’t depends on net package. Because I want to show how HTTP server works in the bottom level, so I copy the request parsing logics from net package into my simplenet package. The parsing for request header part is kind of complex, but it doesn’t influence your understanding about the main concept of HTTP server. If you want to know the details, you can refer to the simplenet/simpleTextProto package. The important thing to understand is HTTP server reads the request message with Read method of netSocket . And the Read method makes socket read system call to get network data from TCP stack:

On the other side, HTTP response is sent back by calling WriteString method of simplenet package

That’s all for the code part. Next let’s try to run this simple HTTP server we build from scratch.

Build (need Linux platform) and run this HTTP server with default options setting and send request to it with curl. The result goes as follows:

the server works as expected.