When you want to do the load performance test to your HTTP backend service, a handy and powerful tool can make your job much easier. For example, ApacheBench (short for ab) is widely used in this field. But it is not today’s topic. Instead, I want to introduce Hey written in Golang and supports the same functionality as ab.

I didn’t list all of the options but only show several related to this article’s content. As you can see in the above list, Hey can support different practical features, such as multiple workers to run in the concurrent style and rate limit by queries per second (QPS). It can also support run by duration and run by request number two modes.

In this article, we can review the design and implementation of Hey to see how to make a load performance testing tool.

The design of Hey is not complex, and the architecture can be divided into the following three parts:

The architecture diagram goes as follows, after reading this article you’ll understand every element in this diagram: 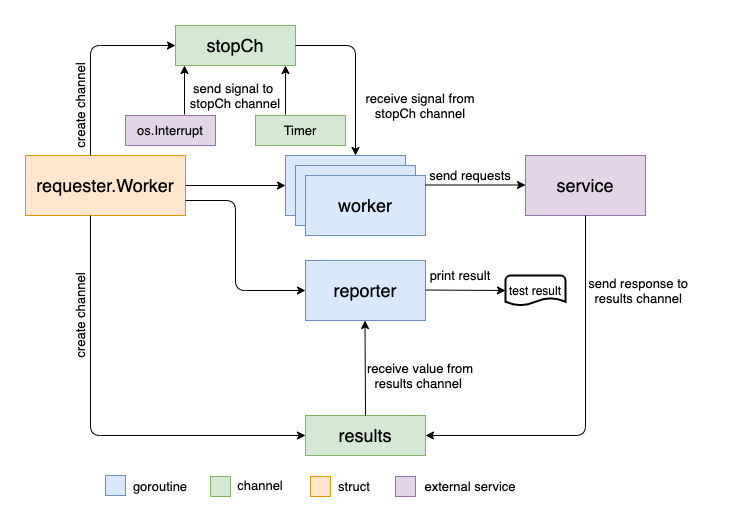 This article will focus on the first item (since it is the real interesting part) to show how to use Golang‘s concurrent programming techniques to realize these features.

In the hey.go file, you can find the entry point main function. Let’s hide the boilerplate code and review the core logic in the main function as follows:

After creating an instance of requester.Work, then call the Init() method.

Note that there are two ways to exit from the program. The first one is the user manually stops the program, for example, by pressing ctrl + c. In this case, the signal.Notify() method from the std library can catch the signal to terminate the process. The second one is by the time duration option. Both of the process exiting logics are running in a Goroutine.

To stop the worker, Stop() method will be called:

What it does is sending several values to the stopCh channel. Note that it sends b.C values to the channel, which is the same as the number of concurrent workers.

You can imagine that each worker should wait for the value from the stopCh channel. When the worker receives one value, it should stop sending requests. Right? Then in this way, I can stop all the concurrent workers. Let’s check our guess in the following sections.

In the above main function, you can see that Run() is called:

There are several points worthy of discussion. In this section, let’s review runWorkers(). And runReporter() and Finish() are related to test result reports, and we will revisit them later in this article.

This is a very typical pattern to launch multiple goroutine via sync.WaitGroup. Each worker is created by calling b.runWorker in a goroutine. In this way, multiple concurrent workers can run together.

Note that before all workers finish their tasks, wg.Wait() will block Finish() to run, which is used to report test results. And we will talk about it in the following sections.

Next step, the logic goes into runWorker method, and let’s review how QPS rate limit works?

The core code of runWorker goes as follows:

But if the user sets the duration option, what is the number of requests? You can find the following logic in the main entry function:

When the user sets duration option, the request number will be math.MaxInt32. In this method, Hey can combine run by duration and run by request number two modes together.

As we mentioned in the introduction part, Hey can support QPS rate limit, and this strategy is written inside the runWorker method. Note that a receive-only channel throttle is created with time.Tick, which sends out a value in each time period. And the time period is defined by

throttle is placed before makeRequest() call, and in this way, we can realize the rate limit effect.

In the runWorker method, you can also see the select and case usage.

As we mentioned in the above section, stopCh channel is used to stop the worker. Right? Now you can see how it is implemented. It maps to the Stop method we reviewed above as follows:

b.C numbers of value are sent to stopCh channel, and there are b.C numbers of concurrent workers as well. Each worker can receive one value from the channel and stop running.

Let’s also have a quick review of how the result report work. Firstly in the makeRequest method, each request’s result is sent to the results channel as follows:

And in the runReporter method, you can see the logic like this:

In this case, a for is used to receive all the values from the channel. Note that the loop will continue until the channel is closed. It is another very typical concurrent programming pattern in Golang. We can realize the same functionality by using select case pattern, as long as we can add one more channel to send the exit signal. But on the syntax level, for loop pattern is much more cleaner.

So there must be one place where the channel is closed, or else the deadlock issue will occur. In detail, you can refer to my previous article for more advanced explanations.

The channel is closed in the Finish method like this:

Please also note that how the done channel works. Finish method firstly close the results channel, then the for loop will break and r.done <- true can have chance to run. Finally b.report.finalize() can print the result since <-b.report.done is not blocked. t

In this article, I show you how to write a load performance testing CLI tool by reviewing Hey as an example. In the code level we discussed several concurrent programming patterns provided by Golang. Concurrent(or parallel) programming is difficult, and Golang is build just for that. Keep practice.