The second article of this series shows that we should not directly exchange public key to establish a secure channel. Instead, certificates should be used to establish trust between clients and servers. And the last article examines the content of certificates, which encodes two very crucial pieces of information: the server’s public key and a digital signature that can confirm the certificate’s authenticity. In this article, let us examine what digital signature is and how it works.

The concept of digital signature can be illustrated as follows: 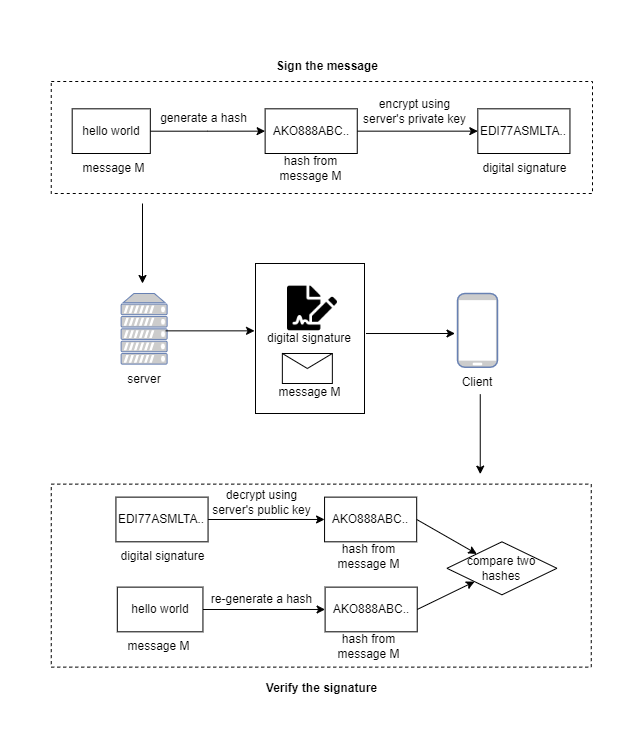 Information security has other attributes, but integrity and authentication are the two traits you must know.

Different from cryptographic algorithms, A hash is irreversible!. This irreversibility is the whole point.

In this way, it is impossible for attackers to reverse engineer such a collision.

The attacker intercepts the message and changes it. Then the verification process of the signature on the client-side can not pass since the re-computed hashing can not match the original hashing.

I will write about how to implement a hash function in the future. In this article, you can ignore the details. Just remember that hashing is irreversible.

The attack shown above does not pass the verification because the signature and the forged message do not match. Then this time, the attacker compute a new hash based on the forged message and sign the hash with his private key. Can this attack work? 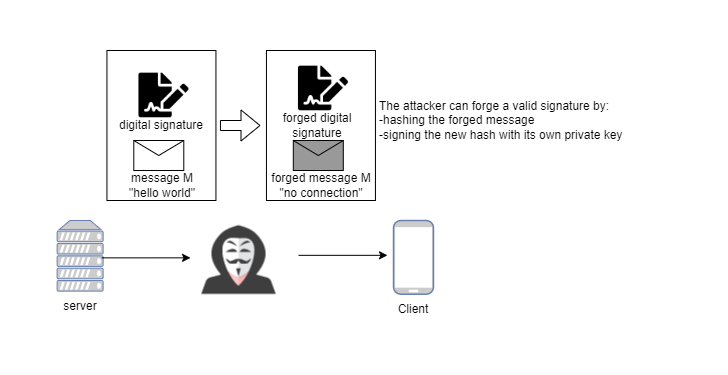 The short answer is No.

When the client gets the digital signature, the first step is to decrypt it. The decryption breaks for this new attack because the forged signature is signed with the attacker’s private key instead of the server’s private key.

It’s impossible for anybody except the owner of the private key to generate something that can be decrypted using the public key. This is the nature of public-key cryptography. I will write other articles to explain it mathematically in the future.

In a word, the private key can prove identity.

How does signature make certificate secure?

And the digital signature is signed based on all of the information instead of only public key. It can prevent man-in-the-middle attack in the two following cases:

So far, I hope you can understand (roughly) the beauty of this Internet security framework.

In this article, I examined how a digital signature works. You see how to sign a signature and how to verify it. Digital signature and certificate are the most abstract part of the PKI framework. So in the following article, let me illustrate the whole process by manually going through the certificate verification process step by step. We will use openssl to examine the result in each step.