At present, everybody knows about the lock icon in the browser’s address bar indicating that the session is protected by HTTPS.In this series of articles, I’ll show you how HTTPS works based on my research.

In the HTTP protocol, the client communicates with the server by transmitting the message over the network. But the message is in the original format known as plaintext. The bad guys (attackers) can easily eavesdrop on the message. That’s the reason why we need SSL/TLS.

There are tons of articles online describing the relationship between SSL and TLS. You can regard TLS as the modern and advanced version of SSL. By conversion, we generally put them together as the name of the network security protocol.

In the OSI model, the HTTP protocol is in layer 7, which is at the top of protocol stacks, how about TLS protocol. Although TLS is short for Transport Layer Security, it’s not in layer 4(transport layer). You can roughly regard it as layer 5(session layer).

This means there is no nontrivial difference between HTTP and HTTPS in terms of message transmission. This series of articles will focus on the security part of HTTPS. If you want to understand HTTP itself, please read my other articles.

As the first article of this series, I will talk about how to establish an HTTPS connection. This introduces a new concept: TLS handshake.

In my previous article, I wrote about TCP three way handshake to establish a TCP connection. For HTTP protocol, that’s all it needs to do. But HTTPS has to do TLS handshake as well. The process can be illustrated as follows:

Note TLS handshakes occur after a TCP connection has been opened via a TCP handshake. 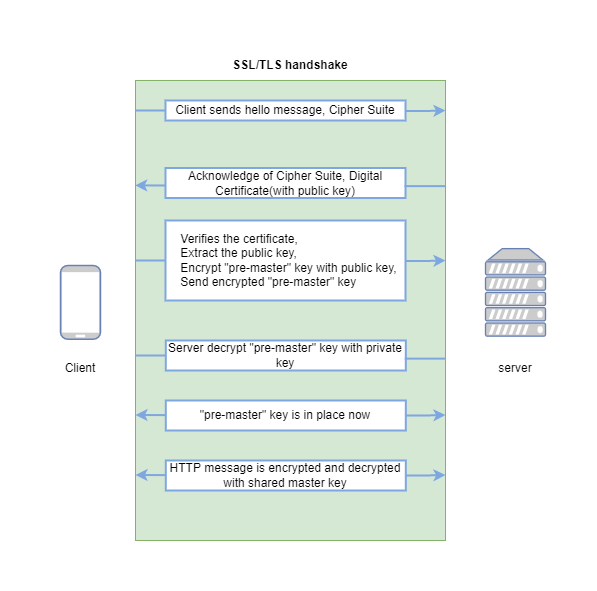 Note to understand each detail of the above processing, you need to have some prerequisite knowledge such as encryption/decryption, hash function, public key, private key, and digital certificate. If you don’t know, don’t worry. After reading this series of articles, you’ll have it under your belt. In this article, I’ll go through this process roughly and ignore the detail of each step.

That’s all about TLS handshake process.

As the first article of this series, I go through the entire process of TLS handshake. In future articles, I’ll show you the mysteries of each part.